Written by
Tamara
Posted in
Uncategorized

Every idea starts with a problem. Customers approached us because they were unable to find a slide on camper that had plenty of storage space, that was easy to set up, had a low bed and allowed you to sleep without having to climb over your partner.

I saw an opportunity to solve the problem by creating a new slide on camper, made to what customers really wanted and not what others thought they should have. 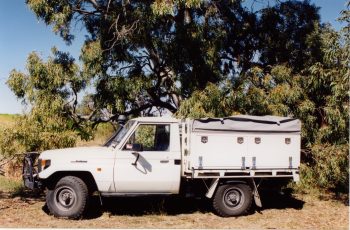 We started a new flagship model to create an alternative slide on in the market. We spent three years researching and developing slide on prototypes that were road tested to understand what worked and what didn’t work. The earlier difficulties encountered were correcting the slide on weight and making it fit to any type of utility tray. Other challenges were the thick canvas being use, which would make folding of the tent difficult.  All issues had to be resolved before the new model could be released.

We were delighted with the results and the conception of the Cameron Slide On was born. We named the slide on the ‘Companion’ because the Cameron Companion travelled with you wherever you went, like a shadow! Many people were pleasantly surprised at how much storage there was and liken it to the “Swiss army knife of campers as it had everything you need”. You can take as much stuff or more stuff than some people towing trailers with the economy and convenience of a single vehicle.

We believe camping is all about having fun and that it should be effortless.

We also believe that everyone should have a camper that is what you want it to be.